Home > Techniques and tips > Bored with your writing project?

Bored with your writing project?

I’m getting a bit bored with my new project already, and I’m not sure why. So, I do what I normally do when I have some kind of question that needs answering – I look it up and write about it. Here we go. 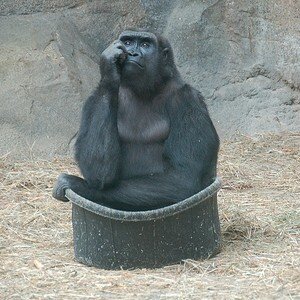 If there were infinite monkeys and infinite typewriters, how long would it take them to get bored with your writing project? Image courtesy of Chris Devers.

This is not the first time I’ve felt bored with what I’m doing, although it normally comes well into the editing process rather than the first draft stage! It might be that the idea has been rattling around in my head for a while and by the time I get it down on paper I’ve already grown bored of it. I think that while I have to have a full time job there’s no avoiding that though. I simply don’t have time to squeeze all of my ideas out into a first draft before the next five come along (considering I have often felt like I don’t have many ideas anymore, that’s rather encouraging).

Having an ideas journal helps a little I think. I’m not constantly thinking of and developing lots of ideas in my head. Instead I think of it, write it down, and can forget about it relatively quickly until I need it again.

I do inevitably start looking towards the next project when I’m nearing the end of a current project though. It’s the anticipation (as well as the apprehension) of starting something new, like when I examine my bookshelf when there’s a few pages left of my current read. And often the end of a project is so drawn out for me, there’s still plenty of time to over-think the next one.

It is often said that if you are bored writing a story, your reader will be bored when they come to read it. I don’t think that’s untrue, but I do think it is somewhat overstated. The implication is that if you’re bored with something you should go on to something else and abandon it. I have enough trouble finishing things as it is, thanks!

No. Although I do believe that a bored writer makes a bored reader, that doesn’t mean that your boring writing isn’t fixable. You can still go back to it afterwards and jazz it up a bit, rework the order of things, or rewrite sections. A big part of the battle is giving yourself something to work with, and that means getting stuff down on paper, no matter what state it’s in.

But what use is thinking over a problem without coming up with some actions to avoid/fix it? With that in mind I want to start a list of things we can do to relieve the boredom of a project and add a little pick-me up to the writing. And I’d like you to help. I’ll start us off, and I’d like you to add your own ideas in the comments. I’ll add any suggestions to the list.

So in summary, I’m going to see if I can write through this rut. First I will do some freewriting around the characters and their background. I might never use this, but it will help me to know them a little more, and it’s got me out of ruts before. I’ll then continue the piece with these things in mind and if it’s boring me, try not to worry. The first draft, after all, is not the place to analyse what you’re doing. That can be saved for editing.