Home > Lifestyle > Too Many Projects

About a month back I had a dream. Yeah, sure, nothing remarkable about that. We all have them. Why should we care?  Well, this was one of those vivid, weirdly coherent dreams. It kinda made sense at the time, but thinking about it now, it actually didn’t really make a whole lot of sense. Dreams are like that.

However, this one dream stuck with me. I think mainly because I felt like I could make it work. I’ve had dreams like this before. In fact, one of my first year writing assignments at university was based upon a dream I had that was so disturbingly coherent that I can still recall the exact details to this day. Getting back to the case at hand, part of me just couldn’t let this dream go, and I started to think about how I could de-dreamify it.

But this is me we’re talking about, and of course I wouldn’t even consider starting a new project without it being some behemoth thing that becomes massively out of control before I’ve even written a word of text. The other thing is, as I’m sure you’re aware, we writers are, at heart, lazy souls, and it just so happened that I had a couple of redundant bits and pieces lying around in the ideas box which could, if suitably manipulated, fit in quite well with this new idea that was forming in my mind.

Getting Ahead of Yourself 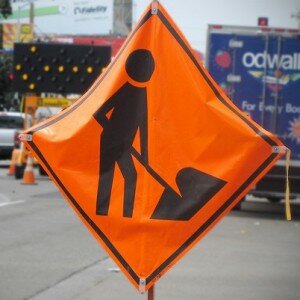 Is it time to put up another "under construction" sign? Image from Anita Hart on Flicker.

‘But wait!’ you may well cry, ‘What about all those other unfinished projects you’ve got lying around?  You need to finish what you’ve started!’  That’s what my ex told me anyway. Oh, but before we go too far down that road…

It’s true. I am acutely aware that I have a massive pile of other projects that are lying around unfinished. Some are even dormant, I haven’t looked at them in that long. Thinking about it now, I have *counts them* nine projects in various stages of completion. That is – let’s be honest – shameful. While yes, I have two that just need a quick redrafting run over, I have others that have stalled in the writing phase. There have been a lot of posts on this site over the years about procrastination, and could this possibly be the worst kind?  Starting yet another project in order to avoid writing one of the existing ones?

Any writing is good writing. Right?

Quite simple when you think about it. If I’m writing this, at least I am writing. But really people, how many projects is too much?  Or rather too many?  As much as I loathe to admit it, a lot of the projects I have could be classed as franchises. In fact only two of my current ‘active’ projects (though I use the term ‘active’ in its loosest sense of course) could be classed as stand alone. Everything else is subject to sequelitis. I always used to maintain that sequels for the sake of it were evil, but between developing the characters in each and having lots of random ideas that (lazy soul that I am) could be hammered into shape to fit with characters that already exist for me. The other problem I have is that more of my ideas are becoming ‘long term’.

Return of the Serialisation

Way back in the middle of last year I wrote a series of posts on serialised fiction, charting my adventures with a new type of writing for me. Sure I’ve had ideas that could work in TV, but what with a new publishing dynamic coming into effect (internet, e-books, etc.) there could well be a growing market for more episodic serialised prose. It took me eight weeks last year to write what amounted to a novel’s worth of episodes which was the subject of my posts last year. Which is the fastest I’ve ever written, well, anything. Granted, those episodes could use a polish, and a second series would be easy for me to write (considering the amount of material I had), so why don’t I get on with it?

Well the same reason I haven’t even written anything of this new project yet. Its just too big.

There I go quoting my ex again… But in terms of writing, for me it becomes increasingly daunting. A screenplay I feel is the easiest. You aim for about 90 pages of script, and as long as you can plough through the formatting, it doesn’t take that long. Then we have a novel. 70-90,000 words. That’s a lot more, and considering how much editing that takes, well, obviously more daunting. Serialised fiction on the other hand… I don’t even want to think about it. 10-15 episodes of, lets say 10,000 words each… yikes!  And that’s just one series!  And three of my projects are structured this way.

So, opinions. Is this new project a good idea?  Or should I not be so bloody stupid and try and get some of my existing projects polished to a shine?  Feel free to leave any comments below. Also, any thoughts about serialised fiction in general.