When I was a teenager, ideas came thick and fast. This stopped being the case long ago, but that doesn’t mean the ability to come up with new ideas is gone. Maybe I’m just out of practice. 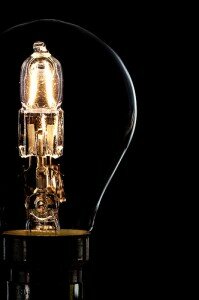 This rather clever photo was taken by image munky

Whenever I write something, I will get ideas for something else during the writing process. Just recently, during my current WIP first draft (a short-ish story. I have two on the go – one in first draft mode, one in editing mode), I generated an idea for a sequel of sorts, or a novel based around the world. It was done simply by thinking about my main character’s background. I decided he was part of a specific class of people. What would happen if these lone warriors, each with their own set of values and ways of getting things done, were forced to unite to defeat a common foe. The forming of this coalition and the internal conflicts would make an interesting novel.

Suddenly my short story is the background to a wider conflict. This gave my story more depth, and made the world more viable as the setting for a longer piece.

This is not the first time it has happened either. My other WIP, currently in editing mode (still. STILL!) gave rise to a sequel short story idea. This again came when fleshing out my main character’s backstory. I decided a story about one of the men in his past might be interesting to explore – et voila! A story is born!

But it’s not just creeping sequelitis that comes from regular writing. I really believe that getting your brain into that practiced writing state can help generate new ideas when you’re away from the page. Writing stays with you, even when you’re not typing or scribbling. And the more you do it the more that state of mind infects the rest of your daily life. I am sure I have more ideas when I’m writing than in my periods when I’m slacking off.

Back to my teenage self. I thought about writing a lot. Hell, I even did some. I can’t say I did more writing then than I did now, but when I did it was not a case of trying to form a routine and get into the process. When I felt inspiration strike me, I wrote. It was part of my psyche, I guess; I had decided I was A Creative, sprung from the womb with an innate talent. I don’t believe in such things anymore. Instead I believe that if I’d put more work in then, my well of ideas would not have run dry. If I’d known what was involved to really become a writer, I would not have got out of practice.

Again this validates my view that writing is a kind of training, not just in refining your craft, but in mindset. That is, after all, the most important training you can give yourself – with the right mindset a person can achieve most things.

Do you ever run dry on ideas? What do you do to get yourself out of the rut, or is the answer always to write?