Build an Editing Plan to Make That 2nd Draft Easier

So I’ve completed a first draft. Congrats to me! But now the intimidating wall that is editing has risen before me, taunting me with its scale and slippery surface!

Well, there ain’t nuttin’ I can do about the height, but I can add some handholds.

In order to do that, I have written an editing plan.

A Man With a Plan

During my first draft I have become aware of a number of issues that need resolving. This plan addresses them directly, but I hope to use it on future drafts. Mayhap it will help you too. 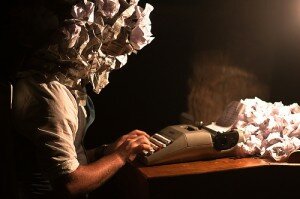 This fantastic image is entitled "Writer's Block" and comes from Drew Coffman over on Flicker. Click to see more.

The plan is split into three (count ‘em!) passes, each with specific objectives, and it runs thus…

How well defined is the journey of your protagonist? Can you say honestly that your character is different at the end of the story compared to the start?

A protagonist’s journey is essential for any story. It normally hinges on some kind of revelation. This is something that either happens to your character, where they realise something about themselves or the world that changes them, or the reader – your protagonist may not realise they have changed, but your reader should.

This can be as subtle as you like of course, but without any change at all your story lacks purpose.

In the particular story I’m editing I can say that my protagonist undergoes some change. But, I’ve never really defined this, to myself or the reader. Obviously I don’t want to tell the reader how he has changed, but I should at least have a clear idea myself.

So in this stage I will be making a conscious effort to note what the character is like at the beginning of the story, and what they are like at the end. I will then map points of change to scenes in the story and go through the draft accentuating those moments, and highlighting aspects of the character that are relevant to their journey.

Conflict, as we so often hear, drives the action of a story. But what makes a conflict really interesting is the tension it creates. Tension defines the pace at which your story moves, and the build up and release of it can be a real page turner.

I do feel like my story lacks tension, and again, it is a matter of making decisions, defining things for myself and then communicating that to the reader. Stakes are a real driver of tension and I will need to make sure the reader understands what is at stake for the character. This should be reflected in the way they behave.

Time pressure is also key. I’m a bit wobbly over how much time my protagonist has and how long it takes them to perform certain actions, so that needs tightening up.

These things are important not just for the story as a whole, but for every scene. Each scene must drive the story forward, and as conflict is the means of doing so, each scene must have conflict, or at least speak to an ongoing conflict. It follows that tension should also play a part in each scene to some degree.

There are some scenes that I have already identified as needing a rewrite, and I know how I’m going to do it. This is something I realise as I go, but not wanting to slow progress on a first draft I save it for editing.

I use Scrivener, so I have made a note against each of these scenes. It may be more useful to keep a separate sheet with details of scenes that need to change and how. It all depends on how you like to work.

As I go through editing for character arc and tension, I will rewrite these scenes as I come across them.

Fill in the Blanks With Research

Again, this is a method of saving time during the first draft. Getting your facts straight is important, but I don’t believe in dropping everything when I come across something I’m not sure how to describe. Instead, I mark those areas by using some placeholder text and putting square brackets around it.

Of course, some research must be done before a story, but the kind of edits I’m talking about here are the little things – distances, names, dimensions or detailed descriptions of real life places or things. As part of this pass I will fill in those blanks.

I am aware that there are some things in my story that are inconsistent. Take the protagonist’s ship for example. I had not decided exactly what the cockpit looked like before I began writing. Even now, I only have a vague idea, but throughout the story I try to describe various panels and doohickeys on the ship’s controls. I’m sure I contradict myself.

I will therefore take some time to describe the cockpit in detail in a separate note, making sure I include all the components used in the story. Once I have that fixed, I can go through and make sure when described, these instruments remain consistent.

Exactly what it says on the tin. There’s a rule of thumb that says you should aim to remove 10% of your words when you revise your draft.

I guess in reality, it depends, but I’m a believer in saying as much as you can with as few words as possible. I fully expect paragraphs to go or be rewritten at half their size. 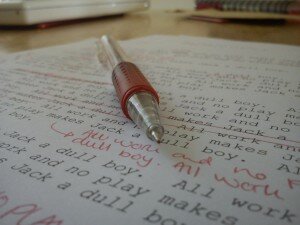 There are a number of stylistic changes that take place during edits, largely around making the text flow and making descriptions more vivid (at least for me).

After reading a post by Janice Hardy, I’m particularly aware of my sentences appearing like lists from time to time.

Style is something I will continually work on. At the moment I’m just going with “instinct” (it’s more likely what I’ve learnt through reading), but as I develop as a writer I will no doubt gather a collection of things to look out for like the lists above.

So there we have it. This editing plan will form a basis for edits on future projects as well, depending in how it goes. Three passes feels like a lot of work to be honest, but frankly I think it needs it.

And I don’t think that will change dramatically in the future. What might change is the amount of time each pass takes as my first drafts get better. I may well be able to roll two passes into one in the future.

Over to you:
Of course, I’d love to know if I’ve missed anything out – is there something you regularly do on your edits? Any comments are welcome! Pop them below to start the discussion.

N.B. You may have detected a fondness for K. M. Weiland’s blog, Wordplay. It’s a great resource and one of the few blogs where I read every post. Go check it out!

Categories: Editing Tags: characters, conflict, Editing, tension
How to Hit Your Writing Targets (And Have Fun Doing It) Stories From Beyond The Box
Subscribe
Twitter