I’m in a funny place. Faced with changing my routine again, I realise my routine doesn’t take into account the complete journey from concept to finished story. What to do?

I’ve never actually finished a story, which is ridiculous and stupid and infuriating and doesn’t make any sense. I’m not writing anything particularly long, either – it’s just silly.

I have several drafts, some in advanced stages, and some abandoned things I know I’ll never touch again. But nothing is so polished I want to let it out yet. 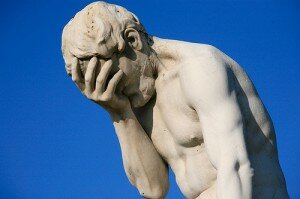 In truth, whenever I mentally note this failure I feel sick.

You can see how old this blog is if you want to look. The fact I have not completed a single story to a standard I can call “finished” is my biggest source of writing shame.

And now, heres we are at the tail end of August, and I had promised myself that by the end of this year I will have something finished and I will have sent it to magazine’s, and I’ll at least have some idea of what my chances are. Time is running out.

All of which makes it laughable that not too long ago I decided to focus my efforts on always creating new stories.

I was (quite rightly) afraid of losing momentum and stopping and starting routines. I was aware I work best (as many people do) when writing every day. That advice is everywhere and it’s as true for me as it is for the people who espouse it.

And I was at least aware this didn’t leave much room for extensive editing, but I thought I’d try it anyway.

Since making that decision, I have stumbled and fallen out of the routine again. Now I’m back to try and sort my head out and get some focus back, and I’ve realised the folly of my ways:

Any routine I put in place now will not be a routine that takes a project from conception to sold.

The reason for this is simple – I have not completed a project yet. Putting together a routine using what I know will only get me as far as I’ve already got on a project. I need to break those barriers and complete something first to know the lay of the land.

Here’s what my routine currently encompasses:

Putting the pieces together. Image courtesy of Liza on Flickr

The solution then seems clear – bloody finish something!

So I am faced with forming a new routine where my previous “new draft” slots in my day are replaced with editing and polishing, and finally submitting.

What About the Future?

The implications of this aren’t great to be honest. Say I get a routine in place that encompasses every stage – that’s going to take up a lot of time, and is inevitably going to eat into my new draft time.

Or, it might end up I occasionally stop drafting new work to focus on completing and submitting, like I am now. I don’t want to have to do that, but there’s not enough time in my routine to write and edit and get something out quickly, and crit (which I need in order to get a story finished), and blog.

And I’ve got another kid on the way, which is great of course, but means another pause, at the least!

I guess I’ll have to sort it out when I get to it. Let go of the uncertain stuff and focus on what I can do now to reach some goals. Yeah, that’s it. Everything’s going to be fine.

Over to you:
HAVE YOU FELT THE PANICâ€½ Sorry, didn’t mean to startle. How do you cope with the demands of a writing routine, full-time job and family? What’s your output like (as discussed, it can’t be worse than mine)? Let’s discuss…