Home > Techniques and tips > What is freehand good for?

What is freehand good for?

In this technology driven society, we get used to hearing that things are, or are soon-to-be obsolete. It’s almost never the case of course. We still have theatre, radio, books etc. Remember Egon in Ghostbusters saying, “print is dead”?

Another example – I remember thinking, why would I ever write something freehand again, when electronic typing is so convenient? But it certainty has its uses.

Back when I were a gnipper

I remember I used to like writing everything freehand on a first draft. The moment I changed my mind was when I had to copy up an overdue essay for school. Time was precious, and typing the whole thing up was a real chore.

I vowed never to do it again.

Since then writing electronically has become more and more useful. All my drafts are done on a word processor (I actually use Writeroom so even the distracting clutter of word processor writing is gone); my blog posts are written on my iPod Touch, and some of my notes are too.

Yes the convenience of writing something and being able to change it and move bits around is invaluable, and now it can go everywhere with you. I can’t imagine writing out a full draft and then having to copy it all out again. I find it hard enough to get things done as it is!

But you’ll notice I said (wrote, whatever), “some notes” earlier and not “all notes”. Yes, there are still some things that just don’t feel natural to type. 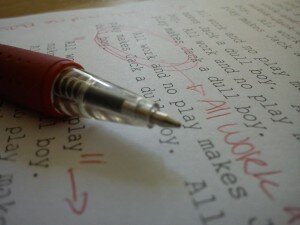 So there you go. Freehand is not dead, and never will be, so I’ll hear none of this freehand goo-goo or ga-ga. What I will hear more of however is your own uses for freehand, so hit the comments with your ideas!