Editing can be laborious work sometimes, so we want to make sure we are getting the most worth out of it. With that in mind, what do you find is the best way to edit?

There are a couple of activities you might go through when editing – types of editing you might say. I’m perhaps oversimplifying here, but you could call them tweaks and rewrites. 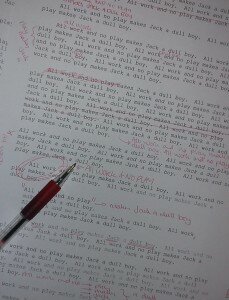 Say you’re basically happy with a chapter of your story, and you’re just reading through it for polish. You change the occasional word, fix some spelling or grammar, and maybe move a couple of sentences around – nothing major.

This is obviously what I’m calling tweaking.

Then there’s that chapter that never quite sat right with you. The character behaves unconvincingly and you always vowed to come back and make him perform some other action here instead. Well you’ve just thought of a way to do it that doesn’t impact other events in the book. Phew, eh? This does necessitate a rewrite of the chapter though.

Then there’s that pesky middle ground (there always is isn’t there). Maybe that character action isn’t such a momentous change as to require a whole chapter rewrite, but it does need several tweaks across 3 pages.

So, fiddle or rewrite?

I came across just such a change this week. It seemed relatively small but I realised it permeated through a longer section.

My instinct was to go through in the tweak fashion, adding a sentence here and there to emphasise the character’s feelings, and foreshadow the choice they were about to make. This would inevitably lead to action on their part, which would need two or three paragraphs extra.

But it was a nasty stop/start process and I knew that I couldn’t make all the component parts mesh convincingly. There are two or three things going on in the story at this point, all interwoven. It worked well, but now I was adding one more. It needed to happen, but it was difficult.

I would keep adding a sentence, then taking it out again, or try moving elements around to make a gap where the new parts could live, but it was like wading through treacle. The problem was I liked it the way it was. I was right to make the change, but the way the piece flowed without it was good.

So tweaking was out, and a rewrite was in. I rewrote the section. Without the existing text (it sounds rather self-important to call something I’ve written a “text”, but there you have it), I was able to write the new bits without distraction and that shoe-horning feeling.

I have yet to try and put it together so we’ll see how that goes, but I was wondering – has anyone had a similar experience where you can’t get going with lots of small changes? Perhaps you always rewrite instead? Any really successful editing stories or techniques would be most appreciated!